On Wednesday 20 January, Royal Australian Air Force (RAAF) Dassault Falcon 7X bizjets, A56-002 as "Envoy 11" and A56-003 as "Envoy 12", were both back at Central Queensland Airports as Australian Prime Minister Scott Morrison and entourage continued on a regional tour of the State. 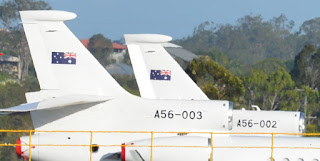 They looked to fly up from Canberra to Cloncurry Airport before continuing up to Trepell Airport.  They then flew South and were spotted as they arrived into Gladstone Airport where it appears that they are staying for at least the night.

Meanwhile, also on Wednesday 20 January, RAAF Alenia C-27J Spartan transport A34-009 as "Envoy 10" was noted departing Cloncurry Airport for RAAF Base Amberley.
While fellow C-27J Spartan A34-010 as "Wallaby 35" departed Longreach Airport and was noted flying to the East.
Sincere thanks to local plane spotter Michael F for taking the time to capture and send through these great photos!
All photos taken by Michael Fleetwood  ©
Posted by Damian F at 8:02 PM