An interesting visitor into Emerald Airport on Wednesday 20 January was American-registered Piper PA-31T Cheyenne N500 which was noted popping into for a visit after flying up from Swan Hill in Victoria via Moree in New South Wales and Gympie.
The Cheyenne originally departed what appears to be its Bendigo base also in Victoria the previous day.
After some time on the ground, N500 departed Emerald Airport for Gympie where it looks to be spending the night.
The Piper PA-31T Cheyenne is a turboprop development of the earlier PA-31P pressurised Navajo.
Meanwhile, also on Wednesday 20 January, Hinterland Aviation Cessna 208 Caravan VH-HLL was spotted at my local Clermont Aerodrome. 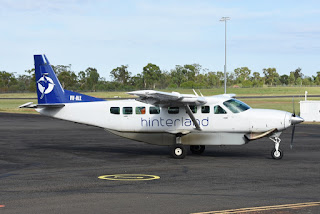 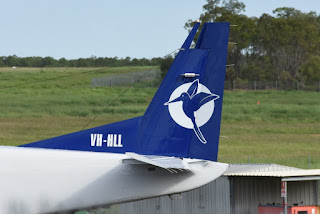 It arrived from Rockhampton Airport as HND310 and later departed to the Labona Station Airstrip within Adani Australia's (Bravus Mining & Resources) Carmichael Coal Mine site as HND311 before then flying back to Rocky but as HND312.
Of interest, fellow Hinterland Aviation Cessna 208 Caravan VH-NDC was later noted calling into my local Clermont Aerodrome from Rockhampton Airport and Labona as HND360/1 before returning to Rocky as HND362.
While Ipswich-based Pilatus PC-12/47E VH-PLE was noted visiting a Station to the West of Clermont, flying up from and returning to Brisbane and the Sunshine Coast.
And American-registered (but Australian-based) SOCATA TBM 700 N700RU was noted arriving into the Whitsunday Airport at Shute Harbour from Archerfield also on Wednesday 20 January.
UPDATE!  N700RU returned to Archerfield on Saturday 23 January.
Finally, also on Wednesday 20 January, Link Airways / Vee H Aviation Cessna 441 VH-VEJ was noted flying up from Brisbane to Collinsville Aerodrome.  It then called into Mackay Airport before returning to Brisbane.  This could possibly be a replacement for the former Seair Pacific / Istelcote De Havilland DHC-6 Twin Otter flights that operated last year.
Photo taken by Simon Coates  ©
Posted by Damian F at 8:42 PM