A30-005 initially flew up directly from RAAF Base Williamtown near Newcastle as "Mitchel 21" but remained at flight levels.  It turned around near Bundaberg and overflew Hervey Bay Airport before returning to Williamtown.
A30-005 then took to the skies once again, this time as "Mitchel 20" and looked to again fly up directly from Williamtown to complete three missed approaches at Hervey Bay (Fraser Coast) Airport.  It then returned to WIlliamtown via one further missed approach at the Gold Coast.
Meanwhile, late on Thursday 21 January, Royal Australian Air Force (RAAF) Alenia C-27J Spartan transport aircraft A34-001 "Wallaby 41" was noted completing airwork including several approaches to Bundaberg Airport. 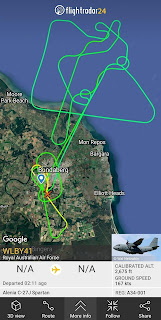 It had flown up from RAAF Base Amberley and later returned there after some time in the Bundaberg Airport circuit.
Photo taken by Daniel Bishop  ©
Posted by Damian F at 8:08 PM