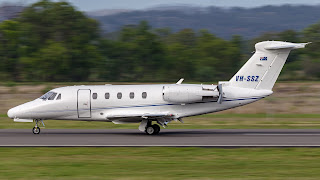 The sleek Citation bizjet looked to arrive from and then depart back to its Gold Coast base. 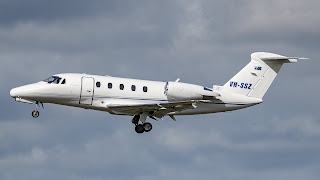 Also noted calling into Rockhampton Airport, also on Tuesday 5 January was Air Gold Coast Beech 58 Baron VH-YDC which arrived from the Gold Coast and Kingaroy.  It later departed to Townsville.
UPDATE!  On Wednesday 6 January, VH-YDC returned to Rockhampton Airport from Townsville and later departed to Kingaroy, Archerfield and the Gold Coast.
Meanwhile, also on Tuesday 5 January, New South Wales-based Beech 95-A55 Baron VH-ISA passed through Roma and Mackay Airports while heading North - possibly to the Whitsunday Airport at Shute Harbour.
And Brescon P/L Beech B200 King Air VH-WXB landed at Rolleston Aerodrome from Toowoomba-Wellcamp via Chinchilla and Injune Airports.  It then departed back to Chinchilla and Wellcamp Airports.
Finally, on Monday 4 January, Townsville Airlines Beech 1900D VH-RUE popped into Rockhampton Airport from Brisbane before flying up to Townsville and then Cairns.  It had earlier flown down from Far North Queensland to Brisbane.
And Seair Pacific / Istlecote Cessna 208 Caravan VH-TQW flew up from Hervey Bay (Fraser Coast) and Maryborough Airports to Wanella Station (near Coppabella) before then flying to Lady Elliot Island.
Sincere thanks to the local plane spotter Steve V for allowing us to share these great photos!
All photos taken by Steve Vit  ©
Posted by Damian F at 7:52 PM