On Saturday 16 January, Machjet (Machjet International) Cessna 525 Citation CJ1 bizjet VH-SIY was noted calling into Hamilton Island Airport. It looked to arrive from its Sunshine Coast base via the Gold Coast.

After a couple of hours on the ground, VH-SIY departed Hamilton Island Airport and returned to the Sunshine Coast.
Meanwhile, out at Longreach Airport, also on Saturday 16 January, a nice corporate turboprop in the form of Victorian-based SOCATA TBM700 VH-CEA was noted passing through. 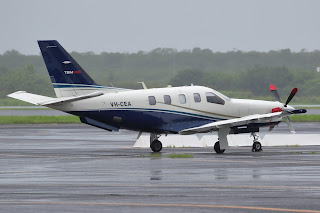 It flew in from its Melbourne (Essendon) base and later departed to Mareeba and Cairns (where it is pictured).
Photos taken by Russell Prothero and Jonathan Williams  ©
Posted by Damian F at 9:02 PM