Early on Tuesday 26 January, Surveillance Australia / Australian Border Force (ABF) Cobham Aviation-operated Dash-8-200 VH-ZZC was photographed as it departed on a surveillance sortie out of Rockhampton Airport. It was heard to be using its usual radio callsign of "Borderforce 33". 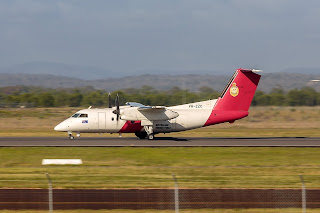 VH-ZZC looked to arrive into Rockhampton Airport after completing another sortie during the previous day, Monday 25 January.

The Australian Border Force Dash-8 aircraft haven't been seen in Central Queensland for some time so it has been great to see them again operating out of Rockhampton Airport on off-shore sorties.