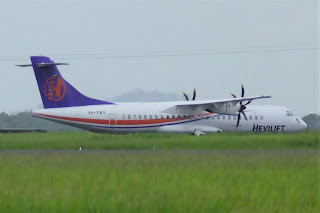 VH-YWV was photographed early on Tuesday 19 January, short before it then returned to Townsville, again as HT701.
Reports suggest that it flew personnel and equipment into Mackay in preparation for the approaching Tropical Cyclone Kimi.
Of interest, this is the first time we've spotted VH-YWV in Central Queensland since it was painted into the Hevilift Australia colours some time during the latter part of 2020.
As mentioned previously, VH-YWV was registered to Hevilift Australia at the start of April 2020 after it was delivered to the airline in Brisbane registered as OY-CLU to Nordic Aviation Capital in late March.
Photo taken by 'JM'  ©
Posted by Damian F at 7:48 PM