On Monday 4 January, Timberline Helicopters (USA) Sikorsky UH-60A Blackhawk N563DJ was spotted as it passed through Charleville Airport.  It looked to arrive from the North. 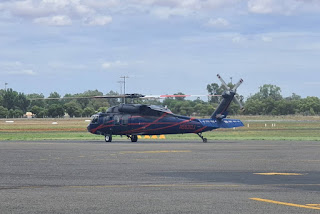 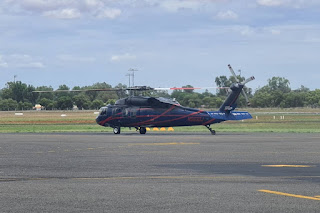 After taking on fuel, N563DJ departed to Scone in New South Wales where it will be based during the local bushfire season.
N563DJ had returned to Australia via Darwin during the middle of December 2020 having operated in Indonesia since the middle part of last year.
Of interest, the refurbished ex-US Army Blackhawk has previously operated during the Australian bushfire season out of Scone with locally-based Pay's Helicopters as "Helitak 260". Pay's Helicopters has been in partnership with Idaho-based Timberline Helicopters since 2016. Under the agreement, a refurbished UH-60A Black Hawk has been used extensively in firebombing operations across regional New South Wales.
Sincere thanks to local plane spotter Zac F for taking the time to capture and send through these great photos!
All photos taken by Zac Fitzgerald  ©
Posted by Damian F at 9:21 PM

Email ThisBlogThis!Share to TwitterShare to FacebookShare to Pinterest
Labels: Charleville, Sikorsky, US Army