On Saturday 9 January, Avia Aviation (Victoria) Cessna 510 Citation Mustang bizjet VH-MSU popped into a couple of Central Queensland Airports before finishing the day and being photographed parked at Mackay Airport. 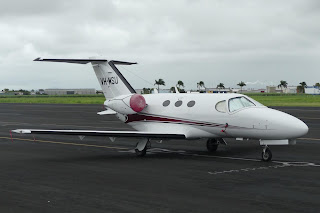 VH-MSU departed Melbourne (Moorabbin) and called into Charleville Airport before flying up to Hamilton Island Airport.  It then departed Hamo and arrived into Mackay Airport where it appears to be staying for at least the night.
Also noted visiting Hamilton Island Airport, also on Saturday 9 January, was re-registered Air Gold Coast Cessna 525 Citation CJ1 bizjet VH-CDG.  It arrived from and later departed back to Archerfield, but flying via the Gold Coast.
While eventually calling into Hamilton Island Airport, also on Saturday 9 January, was Brisbane-based Cessna 525 CitationJet M2 bizjet VH-YWS.  It flew up from Archerfield but was unable to land due to inclement weather and diverted to Townsville.  VH-YWS then flew back and landed at Hamo from Townsville before it then later returned to Archerfield, also flying via the Gold Coast.
And McDermott Aviation Group / Machjet International Raytheon B200 King Air VH-NSN also eventually visited Hamilton Island Airport also on Saturday 9 January.  It flew South from Cairns but was also unable to land at Hamo and diverted to Mackay Airport.  VH-NSN then flew up to and landed at Hamo before then returning and Cairns and eventually flying 'home' to the Sunshine Coast.
Meanwhile, down at Rockhampton Airport, also on Saturday 9 January, Hinterland Aviation Cessna 208 Caravan VH-LZK departed to Cairns as HND663 after operating out of the beef capital to Labona Airstrip and back over the previous couple of weeks.
Fellow Hinterland Aviation Cessna 208 Caravan VH-NDC remains at Rockhampton Airport.
UPDATE!  On Sunday 10 January, Hinterland Aviation Cessna 208 Caravan VH-HLL arrived into Rockhampton Airport from Cairns as HND851.
Of interest, on Friday 8 January, Hinterland Aviation Cessna 208 Caravan VH-CVN completed a flight into Hamilton Island Airport from and back to Townsville as HND648.  While on Thursday 7 January, Hinterland Aviation Cessna 402C VH-TFK completed a flight into Hamilton Island Airport from and back to Cairns as HND430.
And Sydney-based Hawker Beechcraft G36 Bonanza VH-JKL finally returned to Bankstown, flying via Goondiwindi.  It had arrived into Hamilton Island Airport back on Boxing Day!
Finally, with the inclement weather passing through Mackay and the Whitsundays on Saturday 9 January, all flights in and out of Proserpine (Whitsunday Coast) Airport were cancelled.
While some QantasLink flights to Mackay Airport were forced to divert - Dash-8-Q400 VH-QOA operating QLK2355 from Townsville to Mackay diverted to Rockhampton Airport.  It later departed to Brisbane as QLK2351.  While Dash-8-Q400 VH-QOJ as QLK2350 was held on the ground at Rockhampton Airport to wait for Mackay-bound passengers from the Southbound flight.  It later departed to Mackay Airport as QLK2354.
Photo taken by 'JM'  ©
Posted by Damian F at 9:14 PM