After arriving earlier in the week from Brisbane via a stop at Hamilton Island, I was lucky enough to capture a couple of quick photos late on Thursday 24 August as Brenzil's Dassault Falcon 7X bizjet VH-CRW sat quietly on the Mackay Airport parking apron. 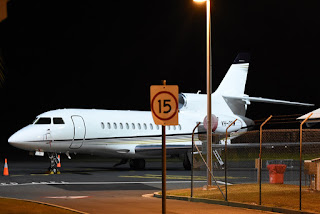 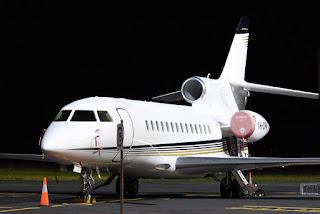 Meanwhile, over the last few days, there has been a number of Australia-based corporate bizjets that have been noted coming and going at CQ Airports.  Here is a quick summary...

On Friday 25 August, Cirrus (Australia) Cessna 510 Citation Mustang bizjet VH-SQY departed Hamilton Island Airport for its Wagga Wagga base before it later continued to Melbourne (Essendon).  It had arrived at Hamo on Friday 18 August from Wagga Wagga via Bankstown.  Also on Friday, Mitchell Water Cessna 525 Citation M2 bizjet VH-WMY into Hamo from the Gold Coast.  It later departed back to the Gold Coast before it continued to Yarrawonga and Essendon.

Back at Mackay Airport, on Friday 25 August, the locally-based Embraer EMB-550 Legacy 500 bizjet N142GZ returned home from Brisbane after flying South to the capital on Thursday 24 August.  I missed it all!

Over the weekend on Saturday 26 August, the action didn't stop with another nice pair of arrivals into the Whitsundays with Linfox Express Charter / Air National Australia Canadair CL-600-2B16 Challenger 604 VH-LEF arriving into Hamilton Island Airport from its Essendon base.  While visiting Proserpine (Whitsunday Coast) Airport a short time was Jetstream Aviation (Emprja P/L) Cessna 550 Citation II bizjet VH-VDF.  It arrived from the Sunshine Coast and later departed to the Gold Coast.

UPDATE!  VH-LEF returned to Essendon from Hamo on Wednesday 30 August.

On Sunday 27 August, Avcair (Norris Aviation) LearJet 60 bizjet VH-XPN was believed to have called into Hamilton Island Airport, arriving from and later departing back to its Brisbane base.

Finally, as I write this post late on Sunday night, I note that on Monday 28 August, Balmoral Air Dassault Falcon 2000LX bizjet VH-WIO will yet again visit Hamilton Island Airport, arriving from and later departing to its Bankstown base.
Posted by Damian F at 8:29 PM