Rockhampton-based plane spotter 'IAD' was in the lovely Fraser Coast region on business this week and early on Tuesday 22 August, he was pleasantly surprised to see that the aircraft operating his early morning flight from Hervey Bay (Fraser Coast) Airport to Brisbane was QantasLink Dash-8-Q300 VH-SBT which was looking resplendent in the new Qantas corporate livery. 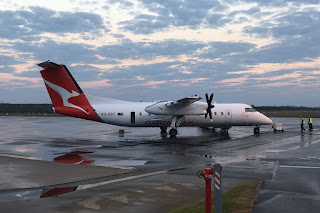 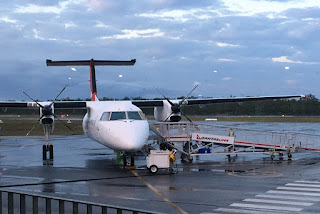 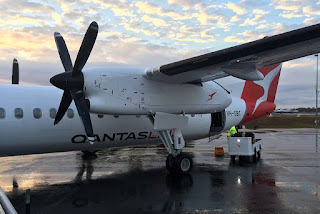 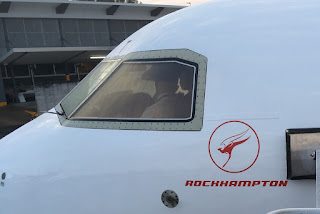 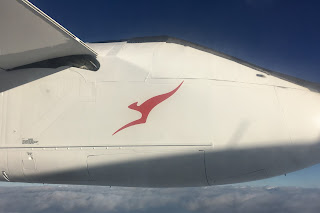 It only returned to service on Sunday 20 August after spending time in the Townsville-based paintshop Flying Colours where the new livery was applied.  It has also been noted operating flights to Emerald and Bundaberg Airports in the days since.

VH-SBT also looks to have picked up the name 'Rockhampton'.

Of interest, VH-SBT is the second QantasLink Dash-8-Q300 to be repainted in Townsville following VH-SBB which emerged from the paintshop at the beginning of the month but shortly after positioned to Sydney where it has been operating scheduled services from to regional New South Wales (NSW).

I've read that fellow Dash-8-Q300 VH-TQZ has now flown to Townsville for re-painting.

As we've mentioned previously, there is one other QantasLink Dash-8-Q300 flying around parts of CQ in a modified livery with VH-SBW still being noted at Bundaberg, Emerald and Rockhampton Airports (amongst other places) still wearing its plain white livery.


VH-SBW spent some time operating in New Zealand in this plain white livery operating for Jetstar on their regional New Zealand routes while their own Dash-8-Q300s were in Brisbane undergoing planned maintenance.

At the time of writing, I also believe that three Qantas mainline Boeing B737-800 aircraft have also been repainted into the new Qantas corporate livery - VH-VXM, VH-VYD and VH-VYE (pictgured) - however, I don't believe any of these aircraft have visited CQ at Hamilton Island Airport.


Sincere thanks to 'IAD' for capturing and sending through these great photos of VH-SBT at Hervey Bay!  I think the livery looks quite nice!