Over the last couple of days, Royal Australian Air Force (RAAF) Boeing B737-7DF(BBJ) A36-001 was noted in the skies of Central Queensland, completing what looked to be another training flight out of Canberra, flying up and down the Queensland coast.

On Tuesday 8 August, A36-001 was heard to be flying as "Envoy 35" and was spotted on the ground at Bundaberg Airport by local plane spotter Micah S. 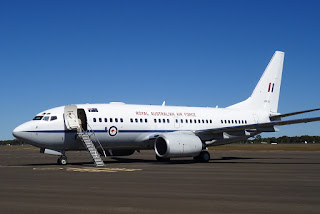 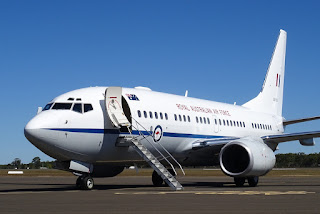 Like previous times, it looked to fly into Bundaberg Airport from Coffs Harbour before departing a short time later for Hamilton Island Airport.   From Hamo, A36-001 reportedly continued to Cairns before finishing the night at Townsville.

Then on Wednesday 9 August, A36-001, again as "Envoy 35", departed Townsville and called into Proserpine (Whitsunday Coast) Airport.  It was then later noted arriving into Gladstone Airport before later being heard arriving into the Gold Coast.  The RAAF 34 Squadron VIP aircraft then looked to have then continued back to Canberra.