Very late on Monday 7 August, Royal Australian Air Force (RAAF) Lockheed C-130J-30 Hercules transport aircraft A97-450 departed Rockhampton Airport and looked to return to RAAF Base Richmond again as "Trojan 25".  It had arrived from there late on Sunday 6 August and was reported to bring a Royal Australian Navy Clearance Diving team to Rockhampton Airport in the wake the weekend crash of a single United States Marine Corps (USMC) Bell Boeing MV-22 Osprey tilt-rotor aircraft into waters some 30 kilometres off the coast of Shoalwater Bay, North of Rockhampton. 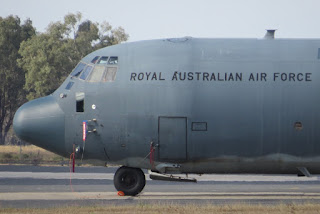 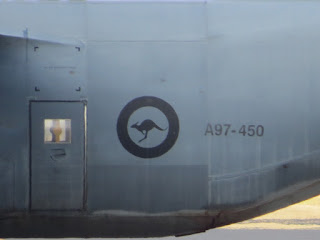 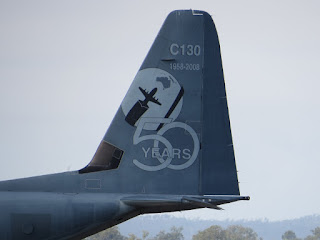 Of interest, A97-450 wears special tail markings commemorating 50 years of service of the C-130 Hercules with the RAAF which was celebrated in 2008.  It is one of many Hercs that are based at Richmond with the RAAF's No. 37 Squadron medium tactical airlift squadron.

Local plane spotter Kayanne H also popped out to Rockhampton Airport on Monday and we sincerely thank her for sending through these great photos!

All photos taken by Kayanne Hardsman  ©
Posted by Damian F at 8:09 PM