On Friday 4 August, Virgin Australia Embraer E-190 VH-ZPR looked to have departed Australia for good, flying out of Brisbane for Apia (Tonga) as VOZ9901.  It has since continued to Honolulu (Hawaii), Van Nuys (California) and Nashville (Tennessee) for post-lease maintenance. 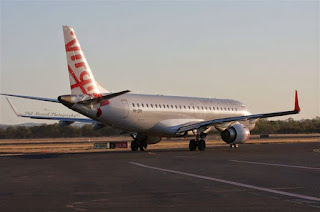 VH-ZPR was ordered new by Virgin Blue and rolled off the production line at Sao Jose dos Campos, Brazil in February 2011.  It arrived into Brisbane on completion of the delivery flight in an all-white livery in April 2011 and entered service just over a week later. 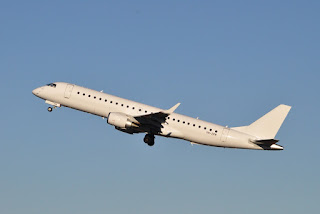 With Virgin Blue being renamed and rebranded as Virgin Australia Airlines in May 2011, VH-ZPR was rolled out in full Virgin Australia livery in July 2011 and looked to take up the name 'Dundee Beach'. 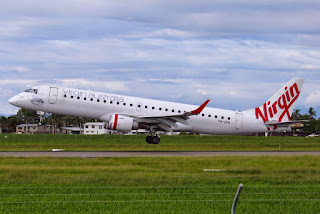 It was also interesting to note that during a period of time from mid-2014 and early-2015, VH-ZPR wore a red nose cone with its white Virgin Australia livery. 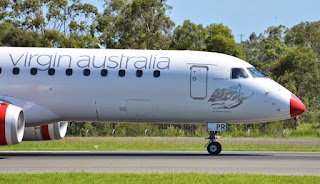 Of interest, VH-ZPR was withdrawn from service only on Tuesday 1 August and its final flights were into Central Queensland.  It started the day of flying on Tuesday by operating the early morning VOZ600 service from Mackay Airport to Brisbane before it then turned around and operated a return flight from Brisbane to Mackay Airport as VOZ605/608.

The decision to reduce Virgin’s Embraer E190 regional jet fleet, as well as its ATR fleet, was first announced in June 2016.

Sad to see them go!

Photo taken by Phil M, Dave and Michael Fleetwood  ©
Posted by Damian F at 10:23 AM