It was another great day for aircraft enthusiasts and many other curious onlookers as again before dawn on Friday 25 August, Volga-Dnepr Antonov AN-124-100 RA-82077 touched down at Rockhampton Airport, again flying in directly from from Paya Lebar Air Base in Singapore but as VDA4964.  It again spent the day parked on Gate 6 at the Southern end of the Rockhampton Airport apron and soon after arriving, it commenced unloading its cargo. 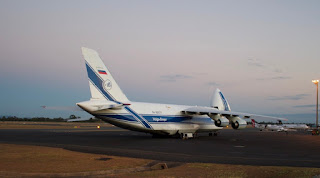 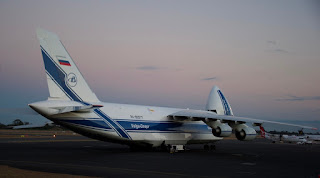 The massive Antonov is shown with its front landing gear raised and the aircraft placed into its unique 'kneeling' position to allow the unloading of its cargo.

On this flight, four of Republic of Singapore Air Force (RSAF) Boeing AH-64D helicopters - believed to be wearing serials '069', '063', '065' and '058' - were unloaded.  They, like the two RSAF Boeing CH-47SD Chinook helicopters delivered earlier in the week, are expected to be re-assembled and test flown ahead of their participation in the Singapore Armed Force's Exercise Wallaby 2017 which is expected to kick-off in the next week. 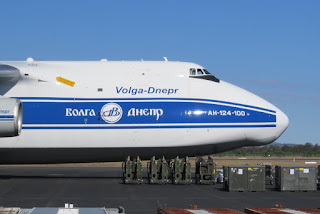 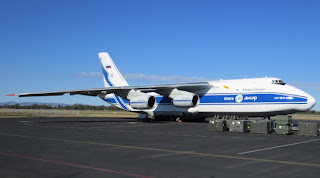 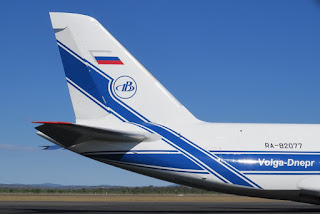 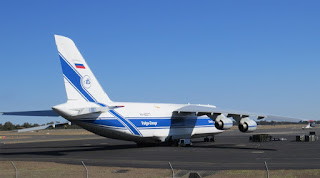 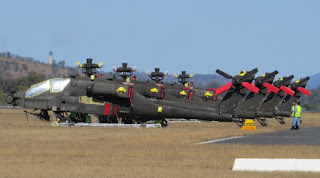 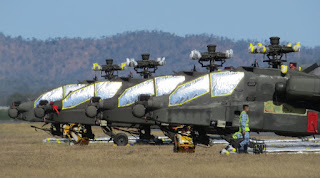 After spending the day parked, and after having many people pop out to Rockhampton Airport to have a look at the mighty aircraft, soon after the sun had set on Friday 25 August, RA-82077 departed Rockhampton Airport destined for Kuala Lumpur but as VDA4965. 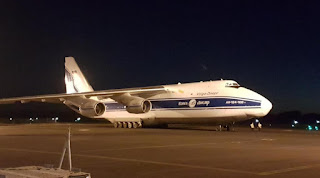 The Antonov AN-124 is not expected to return to Rockhampton until Exercise Wallaby 2017 is complete sometime in October.  The heavy jet action will continue at Rocky however, with passenger charter flights from Singapore expected to commence soon with reports suggesting that Singapore Airlines, Qantas Airways and Royal Brunei Airlines will operating the charters this year.  This will be the first time (I think) that Royal Brunei Airlines has visited Rockhampton Airport!

Sincere thanks to local plane spotters Daniel B, Kayanne H and Scott H for taking the time to capture and send through these great photos of the Antonov 124 at Rockhampton Airport!