What a fantastic sight!! 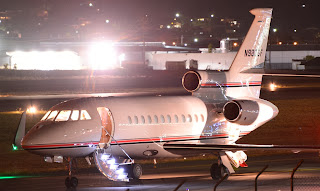 Local plane spotter Michael F has sent through some superb images of a pair of Bechtel Dassault Falcon 900EX bizjets that have arrived into Gladstone Airport late on Sunday 29 September from Brisbane.

First to touch down around dusk was N970SF.

Later in the evening N980SF also touched down.

As shown, the two Falcons were parked on the main taxiway at Gladstone Airport.  Reports suggest that it was quite crowded with aircraft at Gladstone Airport on Sunday evening with the usual commercial turbo-prop aircraft being joined by an Alliance Fokker F-100 (VH-XWN) and Virgin Australian E-190 VH-ZPD which appears to have broken down.  Departure details for the Falcons are unknown at the time of writing.

We hope to have more photos of these fantastic bizjets - and the other visiting aircraft - in the coming days!

All photos taken by Michael Fleetwood  ©
Posted by Damian F at 10:03 AM