A Few Other Plane Spotting Photos from Gladstone Airport 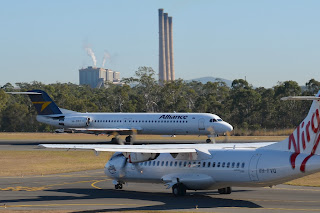 As mentioned in a Blog post below, Alliance Airlines Fokker F-100 VH-XWR visited Gladstone Airport last week on what was believed to be a Fly-in Fly-out (FIFO) charter flight.  It is pictured above and below departing Gladstone to Brisbane as UTY665 on Thursday 12 September. 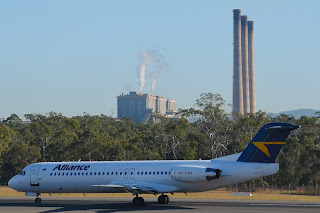 On Friday 13 September, AirServices Australia / Pearl Aviation Hawker Beechcraft B300 Super King Air VH-FIY departed back to Brisbane after a couple of days of flight calibration at Gladstone Airport during the week.

Then later on Friday, Jamie captured the arrival of Virgin Australia Regional Airlines ATR 72-500 VH-FVI as it touched down from Brisbane as VOZ1715.

On Saturday 14 September, Jamie captured some spectacular images of QantasLink (Cobham Aviation) Boeing B717-200 VH-NXR as it arrived from, and then later departed back to Brisbane as QJE1714/1715. 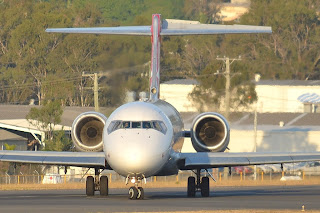 Finally, on Sunday 15 September, Royal Flying Doctor Service (RFDS) Raytheon B200 King Air VH-FDW was captured as it departed to Bundaberg as "FlyDoc 447".

Sincere thanks to Jamie and Tash for a great few days coverage from Gladstone Airport!