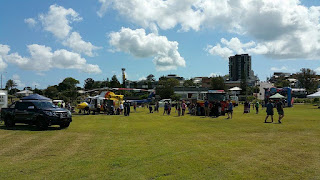 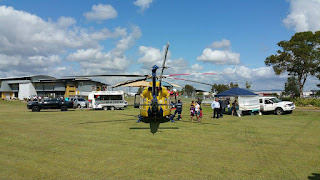 The day forms a part of 'Rescue Chopper Week'.

CHRS (Babcock Mission Critical Services Australasia) Bell 412EP chopper VH-EPR "Rescue 300" ventured down from their Rockhampton Airport base to Gladstone and was open for inspection during its stay in Gladstone.  Also available were photos with the CHRS crew, face painting and jumping castle for the children and a sausage sizzle. 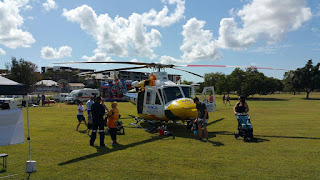 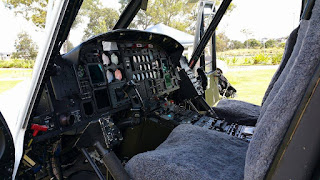 And on Sunday 30 October, the CHRS will host a Community Day in Rockhampton at the RACQ Capricorn Helicopter Rescue Service Hangar, at Rockhampton Airport, on Canoona Road, between 10am and 12noon.

Again, VH-EPR (or maybe fellow CHRS Bell 412 VH-LSY which is also currently at Rockhampton) will be on display and there will be photos available with the crew.  There is also face painting, balloons and snow cones for the children and a sausage sizzle.

Thanks to local plane spotter Michael F for sending through these great photos from the Gladstone Community Day.

All photos taken by Michael Fleetwood  ©
Posted by Damian F at 9:30 PM