On Monday 31 October, Virgin Australia Boeing B737-800 VH-YFK was noted arriving into Gladstone Airport as VOZ1707 from Brisbane.


It then departed to Rockhampton Airport as VOZ1710 before continuing to Brisbane.

This diversion was reportedly caused by the cancellation of a pair of Virgin Australia flights in and out of Rockhampton Airport early on Monday 31 October. The VOZ1231/1234 and VOZ1239/1242 services to Rocky from and then back to Brisbane were both cancelled for an unknown reason.

Meanwhile, also on Virgin Australia, as we highlighted on our Facebook page, last Friday 28 October, Virgin Australia Boeing B737-800 VH-VOM diverted to Rockhampton Airport while operating as VOZ779 from Brisbane to Cairns.  It was heard to make a 'pan' radio call and was believed to have diverted to due to a sick passenger. 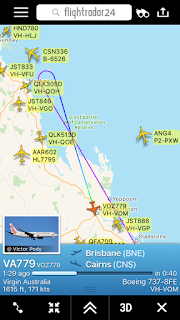