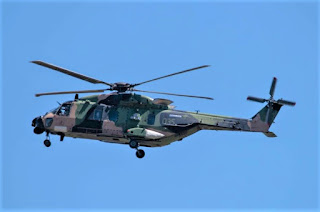 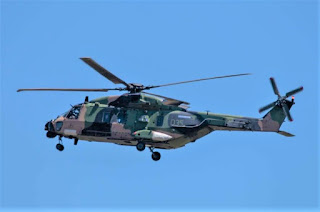 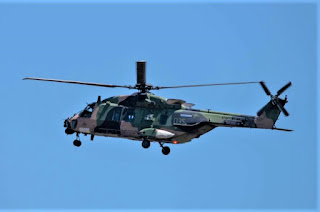 The MRH-90 looked to arrive from the Oakey Army Aviation Centre, and after taking on fuel, it continued up to Townsville.
A40-035 was heard to be using the radio callsign of "Destrier 101" - the same callsign as yesterday's MRH-90 but for a different airframe!
Meanwhile, a couple of Royal Australian Air Force (RAAF) Alenia C-27J Spartan transport aircraft were noted completing airwork at different parts of the region, also on Thursday 31 March.
Spartan A34-007 "Kaos76" flew out of RAAF Base Amberley and completed airwork at Bundaberg Airport.  It then returned to Amberley via more airwork at Oakey.

While Spartan A34-010 "Kaos77" looked to fly out of Amberley and complete airwork at Miles and Kingaroy Airports before returning to Amberley.
Sincere thanks to local plane spotter Scott H for taking the time to capture and send through these great photos of the MRH-90!
All photos taken by Scott Harris  ©
Posted by Damian F at 10:05 PM