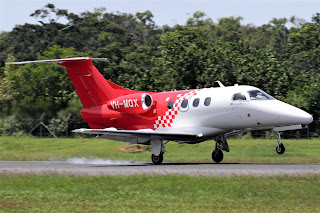 It looked to fly up from Bankstown and then continue up to Cairns where it was photographed touching down.
VH-MQX then flew back South from Cairns to Moree, the Shellharbour Airport at Wollongong and then back to Bankstown.
Meanwhile, also on Sunday 27 March, Jampair P/L (Navair Flight Operations) Embraer EMB-505 Phenom 300E bizjet VH-NSQ flew into Hamilton Island Airport from Bankstown.
UPDATE!  On Tuesday 29 March, VH-NSQ departed Hamilton Island Airport and returned to Bankstown.
While at the Whitsunday Airport at Shute Harbour, McDermott Aviation Group / Machjet International Beech B200 King Air VH-MWZ and Raytheon B200 King Air VH-NSN were both spotted visiting while completing a closed charter flight.  They arrived from Cairns and then both departed to Lizard Island. 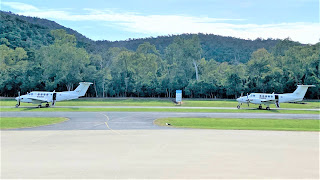 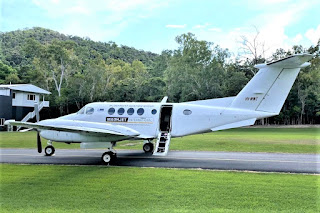 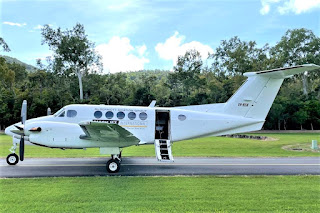 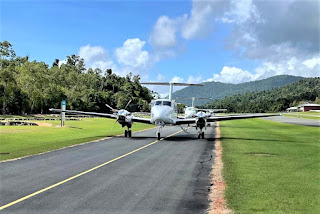 And Hinterland Aviation Cessna  208 Caravan VH-NDC was also spotted at the Whitsunday Airport at Shute Harbour.  It too arrived from Cairns and later departed to Lizard Island, flying as 'HND626'. 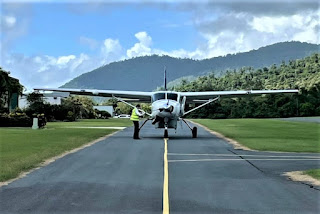 Finally, also on Sunday 27 March, Cessna 208 Caravan VH-OAI which is owned by the Skydive the Beach Group in New South Wales, flew down from Tully to Roma Airport and then the Shellharbour Airport at Wollongong.
As mentioned below, sistership VH-DZQ flew North to Tully the previous day.
And Tex Onsite (Tex Assets P/L) Aero Commander 500-U VH-TXE took to the air once again out of Rockhampton Airport.  It flew to Gladstone Airport and then back to Rocky.
Photos taken by Jonathan Williams and Lee Holloway  ©
Posted by Damian F at 10:40 PM