On Tuesday 29 March, Royal Australian Air Force (RAAF) Alenia C-27J Spartan transport aircraft A34-001 "Kaos 74" was again spotted completing airwork at Rockhampton Airport after it flew back down from Cairns. 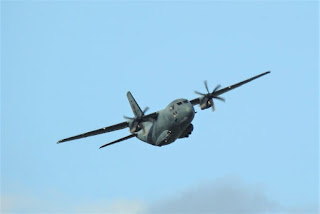 After arriving from the Far North, it completed airwork at Rocky including several missed approaches and touch-and-go circuits.  The Spartan then landed for a period of time.
After the sun had gone down, A34-001 "Kaos 74" completed some taxi exercises and then eventually departed Rockhampton Airport for RAAF Base Amberley.
Photo taken by John Lee  ©️
Posted by Damian F at 9:04 PM