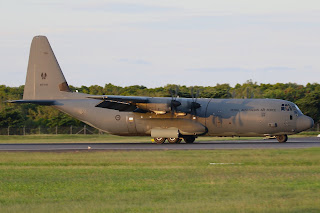 It looked to be flying as "Trojan 36" and came up from RAAF Base Richmond to Prosie where it completed a missed approach before heading West and overflying Collinsville.  It then continued up to Cairns where it was photographed arriving during the late afternoon.
Meanwhile, also on Thursday 24 March, fellow RAAF Boeing B737-7ES / E-7A Wedgetail Airborne Early Warning & Control (AEW&C) aircraft A30-004 was noted completing airwork at Hervey Bay (Fraser Coast) Airport.
It was flying as "Wedgetail 20" and looked to fly up direct from RAAF Base Williamtown to complete the airwork at Hervey Bay.  It then flew back South and looked to return directly back to Williamtown.
Photo taken by Jonathan Williams  ©
Posted by Damian F at 9:20 PM