On Tuesday 31 May, Australian Army NH Industries MRH-90 Multi-Role Helicopter A40-023 was spotted arriving into to Rockhampton Airport after flying down from Townsville as "Destrier 123". 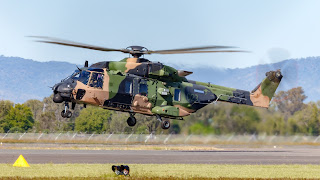 After taking on fuel, A40-023 departed Rockhampton Airport for Brisbane.
Meanwhile, over the previous few days, a pair of Australian Army AAI Corporation RQ-7B Shadow 200 UAVs have been seen on radar flying within the Shoalwater Bay Training Area (SWBTA) as the joint training Exercise Southern Jackaroo continues.  They appear to carry the serial numbers A43-564, A43-626 and A43-627.
Photo taken by Steve Vit  ©
Posted by Damian F at 8:41 PM