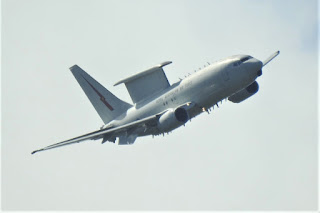 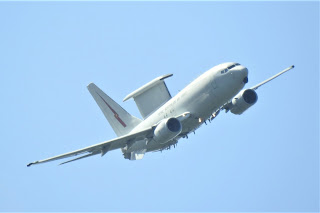 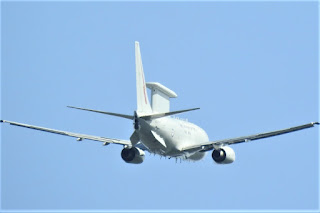 It looked to fly up from RAAF Base Williamtown, and after completing the airwork at Rocky, it returned South to complete more airwork at Coffs Harbour before eventually returning back to Williamtown.
Of interest, A30-003 was heard to be using the radio callsign of "Mitchel 04".
Meanwhile, also on Wednesday 25 May, and as predicted above, Royal Australian Air Force (RAAF) Dassault Falcon 7X bizjet A56-001 "Envoy 21" passed back through a couple of Central Queensland Airports while heading back to Canberra on what appears to be a training flight.
After arriving into Townsville the previous day, the Falcon 7X departed there and called into Proserpine (Whitsunday Coast) and Gladstone Airports before then departing to the Gold Coast, Sydney and then eventually Canberra.
All photos taken by John Lee  ©
Posted by Damian F at 9:36 PM