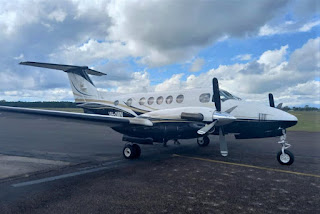 The becoming familiar King Air has been chartered during the current Federal Election campaign and has been ferrying politicians around Australia and also into parts of Central Queensland quite a bit over the last couple of week.
On this occasion, it looked to arrive from Brisbane and then later depart to Archerfield.
Photo taken by David Geck  ©️
Posted by Damian F at 8:48 PM