On Wednesday 18 May, Royal Australian Air Force (RAAF) Dassault Falcon 7X bizjet A56-003 was spotted at Emerald Airport.  It had arrived late the previous evening from Darwin and Alice Springs as "Envoy 94". 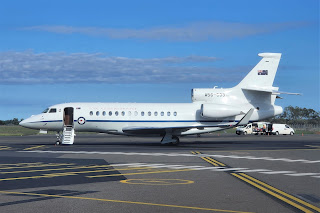 Later on Wednesday, the Falcon 7X bizjet, which is flown by the RAAF's VIP 34 Squadron, looked to depart Emerald Airport for Bendigo in Victoria.  It then continued to Scone, Brisbane and Canberra.