Really interesting to note that on Tuesday 24 May, a flight of two United States Marine Corps (USMC) Bell Boeing MV-22B Osprey tilt-rotor aircraft conducted a long range casualty evacuation (CASEVAC) drill in and out of the Shoalwater Bay Training Area (SWBTA) as a part of Combined Military Exercise Southern Jackaroo 2022. 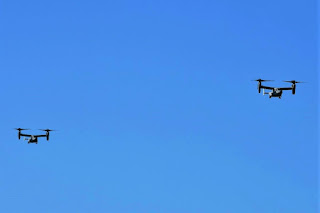 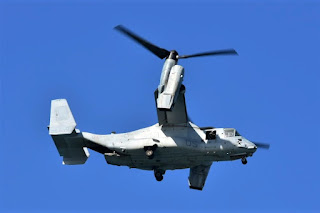 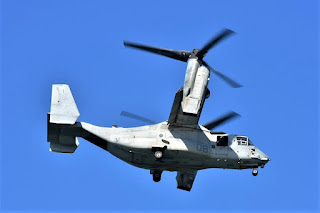 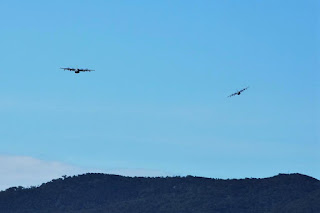 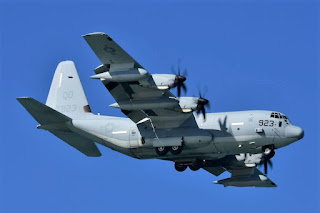 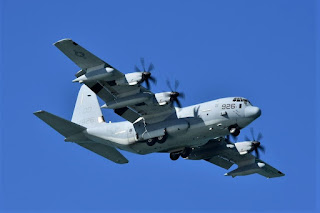 The two Ospreys are part of the current Marine Rotational Force-Darwin (MRF-D) Aviation Combat Element (ACE) and are flown by the Marine Medium Tiltrotor Squadron 268 (VMM-268) (Reinforced) ‘Red Dragons’.  They were photographed arriving into Townsville from Darwin and were identified as 168621 / YQ-08 and 168619 / YQ-05 and flew together as "Hellborn".
The Ospreys were supported by a flight of two USMC Lockheed KC-130J Hercules refuelling aircraft which were identified as 167923 / QD-923 and 167926 / QD-926 which are both flown by the Marine Aerial Refueller Transport Squadron 152 (VMGR-152) the 'Sumos'.  Indeed they were heard using the radio callsigns of "Sumo 90" and "Sumo 87".
To complete the long range Causality Evacuation (CASEVAC) mission, the Ospreys and Hercs originally departed Darwin for Townsville (pictured) where they were all refuelled before the two Ospreys flew into the Shoalwater Bay Training Area (SWBTA).  At the Bay, they landed at a pre-established Landing Zone and picked up patients with simulated injuries that were then treated in-flight while heading directly back to Darwin, again with support from the two Hercules.
The entire mission saw a flight time of around 12 hours total, with a total distance of just 5100 km being flown.
Of interest, Exercise Southern Jackaroo 2022 is a trilateral training activity designed to enhance warfighting interoperability, strengthen international relationships and improve combat readiness.  Personnel from the Australian Army, Japanese Ground Self-Defense Force (JGSDF) and United States Marines from the Marine Rotational Force-Darwin (MRF-D) have mostly been focusing on live-fire and combined arms training.  It is currently underway in the Shoalwater Bay Training Area (SWBTA).
Sincere thanks to Townsville plane spotter 'Shinpow 16' for taking the time to capture and send through these great photos!
Photos taken by 'Shinpow16'  ©
Posted by Damian F at 8:00 AM