On Monday 2 May, Torrens Creek (Hughenden) based SOCATA TBM700 VH-CEA was spotted by me at my local Clermont Aerodrome. 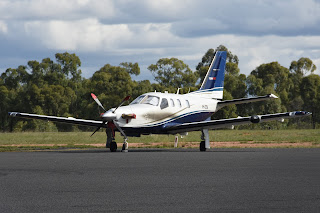 It looked to arrive from Cairns, having arrived there from its Aberfoyle Station base earlier in the day.
UPDATE!  On Thursday 5 May, VH-CEA departed Clermont Aerodrome for Tamworth.
Meanwhile, also on Monday 2 May, Sunshine Coast-based Beech V35A Bonanza VH-MCA landed at Longreach Airport from Sweers Island.  It is due to fly to Gympie on Tuesday 3 May.
While Victoria-based Cirrus SR22s VH-SDA and VH-CFD flew together and also called into Longreach Airport but from Burketown.  They later departed to Cobar in New South Wales.
New South Wales based Cessna LC-41-550FG 400 Corvalis TT VH-CSV also called into Longreach Airport while flying from Dubbo to Karumba.
And after being stored since November last year, Tex Onsite (Tex Assets P/L) Aero Commander 500-U VH-TXE departed Rockhampton Airport for Alice Springs and The Granites.
Finally, also on Monday 2 May, Seair Pacific / Istlecote Textron Aviation (Cessna) 208B Caravan VH-TLH popped into Proserpine (Whitsunday Coast) Airport from Lady Elliot Island.  It then departed down to the Gold Coast.
And Skytrans Airlines Dash-8-100 VH-QQG flew down into Rockhampton Airport from Cairns and Proserpine Airports and then back as SKP81/82.  While fellow Skytrans Dash-8-100 VH-QQC also arrived into Rockhampton Airport from Cairns direct as SKP787 before it then completed a fly-in fly-out (FIFO) run to the Labona Station Airstrip within Adani Australia's (Bravus Mining & Resources) Carmichael Coal Mine site and back to Rockhampton Airport as SKP771/2.
Posted by Damian F at 9:32 PM