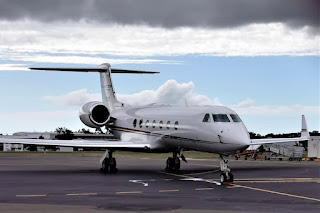 The sleek Gulfstream looked to arrive from and then later depart back to Brisbane.  It looked to have arrive in the country at the Queensland capital at the end of last week.
Of interest, ConocoPhillips is an oil and gas exploration and production company with its corporate headquarters located at Houston, Texas.  It has a number of onshore and offshore operations in Australia including at Gladstone.
N795CP was also spotted visiting Gladstone Airport at the end of March.
Meanwhile, also on Monday 16 May, Avcair Embraer 500 Phenom 100EV bizjet VH-NJR looked to visit Maryborough Airport once again from its Brisbane base.
Finally, also on Monday 16 May, Tex Onsite (Tex Assets P/L) Aero Commander 500-U VH-TXE was noted departed Rockhampton Airport for Mount Isa.
Raytheon A36 Bonanza VH-YGM arrived into Rockhampton Airport from its Orange base.  It later flew to Emerald Airport.
UPDATE!  On Tuesday 17 May, VH-YGM departed Emerald Airport and returned to Rockhampton Airport before then departing to Dalby.
Torrens Creek (Hughenden) based SOCATA TBM700 VH-CEA departed Rockhampton Airport for Aberfoyle.  It had arrived from there the previous day.
Kirkhope Aviation (of Melbourne) Beech B200 King Air VH-ZOK was back in the region, flying down from Mareeba to Emerald and then Roma Airports.  It had flown North from Melbourne (Moorabbin) to the Central West and further at the start of the month.
And Helicopters Townsville Eurocopter AS 350 B2 Squirrel helicopter VH-DIC was spotted passing through Mackay Airport as it flew South from Townsville to Gladstone Airport. 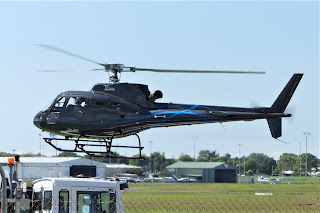 UPDATE!  On Tuesday 17 May, VH-DIC operated a couple of local flights out of Gladstone Airport before then returning North to Mackay Airport and then Proserpine (Whitsunday Coast) Airport.
UPDATE!  On Wednesday 18 May, VH-DIC departed Proserpine Airport and flew back to Townsville.
Of interest, Pacific Fisheries Aviation Services P/L Aerospatiale AS350 SD squirrel helicopter VH-HSR continues to operate marine pilot transfer and other flights out of and back to Gladstone Airport.
Photos taken by 'AC' and 'JM'  ©
Posted by Damian F at 8:30 PM