Also on Saturday 7 May, a nice pair of turboprop visitors were spotted at Rockhampton Airport, with both believed to be operating sports charters for both Far North Queensland-based Rugby League and Basketball teams.
Skytrans Airlines Dash-8-100 VH-QQC arrived from Cairns as SKP953 and looked to be staying for the night. 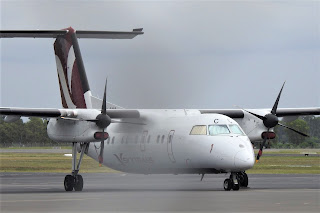 UPDATE!  On Sunday 8 May, VH-QQC departed Rockhampton Airport for Mackay Airport before then later returning to Cairns as SKP954/5.
While Hevilift Australia (Fixed Wing Division) ATR 72-500 VH-FVI arrived also from Townville and then Cairns but as HT712/3. 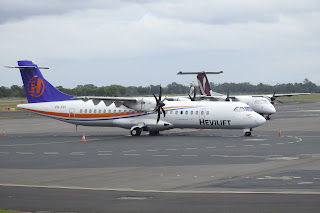 It later returned to Cairns as HT714 before then returning to Townsville as HT762.
Sincere thanks to local plane spotter John L for taking the time to capture and send through these great photos!
All photos taken by John Lee  ©️
Posted by Damian F at 8:44 PM