On Sunday 22 May, Pionair Australia British Aerospace BAe-146-200 VH-SYO was spotted arriving into Hamilton Island Airport from Cairns as 'SFZ611' / "Skyforce 611" as what appears to be a closed tourist charter flight continues and returns to the region. 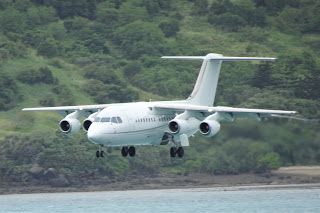 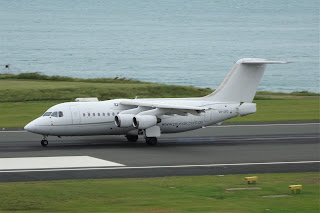 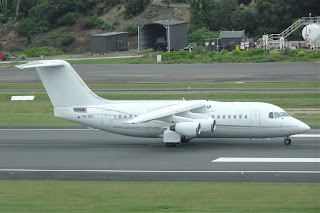 As posted below, VH-SYO passed through Longreach Airport the previous weekend and since then, the BAe-146 has been noted flying in Far North Queensland - up as far as Horn Island.
At the time of writing, it appears that VH-SYO is staying on Hamo for at least the night.
UPDATE!  On Monday 23 May, VH-SYO departed Hamilton Island Airport for Brisbane as 'SFZ612' / "Skyforce 612".  It then flew to Bankstown as 'SFZ9009' / "Skyforce 9009".
All photos taken by 'AC'  ©️
Posted by Damian F at 8:07 PM