On Saturday 21 May, Pionair Australia British Aerospace BAe 146-200QC VH-SAZ was photographed visiting Emerald Airport.  It had earlier flown in from the Gold Coast as 'SFZ677' / "Skyforce 677", having earlier positioned down from Brisbane as 'SFZ9051' / "Skyforce 9051" 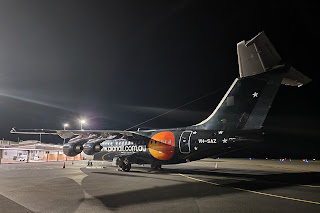 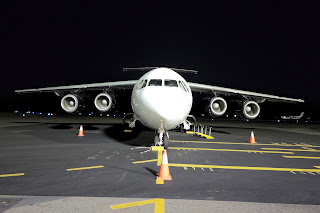 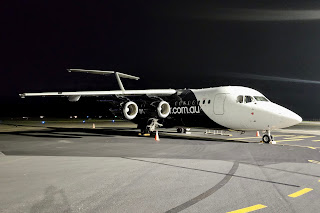 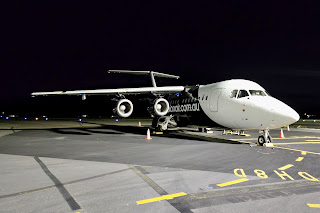 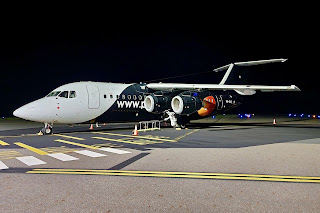 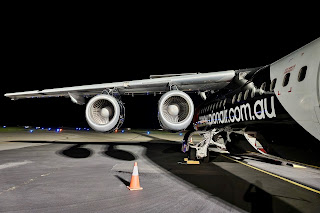 It is believed that the BAe 146 flew the Burleigh Bears Rugby League teams (three of them) and support staff to town to take on the Central Queensland (CQ) Capras in the latest Rounds of the respective Queensland Rugby League (QRL) competitions being held in Emerald.
After darkness had fallen, and all the games had finished, the mostly victorious Bears teams (2 out of 3) re-joined VH-SAZ which then departed Emerald Airport and returned to the Gold Coast as 'SFZ677' / "Skyforce 677" before it then returned to Brisbane for the night but as 'SFZ9055' / "Skyforce 9055".

Meanwhile, also noted visiting Emerald Airport, also on Saturday 21 May, was Brisbane-based Piper PA-31-350 VH-RPV which visited from Archerfield and the Gold Coast as well.
And RDO Equipment Co. (ex Vanderfield) Cessna 182 VH-JQC arrived into Emerald Airport from the North.  It had also visited during the previous week.
Finally, out at Longreach Airport, also on Saturday 21 May, and aside from the Qantas Airways Boeing B737-800 VH-VXB - see Blog post below - Bowenville (near Toowoomba) based Cessna 525 CitationJet CJ1+ bizjet VH-JSZ arrived, flying up from Archerfield and Toowoomba-Wellcamp.
UPDATE!  On Sunday 22 May, VH-JSZ flew back down to Wellcamp and then Archerfield.
And BPW Aviation / Airspeed Aviation Cessna 404 Titan VH-SKV departed Longreach Airport for its Scone base in New South Wales.  It had arrived from Darwin and Mount Isa the previous day.
All photos taken by 'AC'  ©
Posted by Damian F at 9:52 PM