On Tuesday 31 May, three Flight Training Adelaide (FTA) / Qantas Group Pilot Academy Diamond DA-40 Star training aircraft were spotted at the Whitsunday Airport at Shute Harbour while completing a pilot-training flight to the region from their Toowoomba-Wellcamp base. 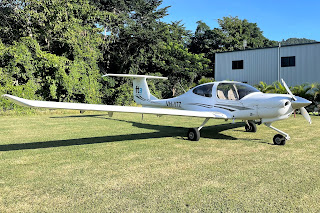 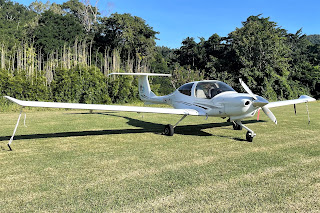 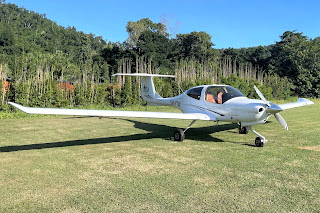 The three Diamond Stars were identified as VH-YTU, VH-YTW and VH-YTZ and arrived into the Whitsundays the previous day, all flying up from Wellcamp to Bundaberg and Mackay Airports before VH-YTU and VH-YTZ then flew to Shute Harbour and VH-YTW flew to Hamilton Island Airport.
On Tuesday, all three met at Shute Harbour and departed from there to Rockhampton and Bundaberg Airports before they returned to Wellcamp.
Meanwhile, some other lighties noted around the region, also on Tuesday 31 May, included FKG Air (Redjet Aviation) Hawker Beechcraft B200GT VH-FKB which visited Rockhampton Airport from its Toowoomba base.
Brescon (Toowoomba) Beech B200 King Air VH-XDW flew up to the Labona Station Airstrip within Adani Australia's (Bravus Mining & Resources) Carmichael Coal Mine site from Toowoomba-Wellcamp Airport and then back.
While Hinterland Aviation Cessna 208 Caravan VH-TFS completed a local flight out of and back to Rockhampton Airport as 'HND410'.  VH-TFS and VH-LZK are currently completing the Hinterland Aviation Fly-in Fly-out (FIFO) charter flights from Rockhampton Airport to Labona and back.  It appears that VH-TFS 'swapped' with VH-TFQ at Labona last Thursday 26 May.
And out at Longreach Airport, Aircraft Australia PA-31/A1 Navajo VH-WHE was noted completing airwork between there and Saint George and Blackall Airports before it then departed Longreach Airport for Redcliffe.  It looked to have arrived from its Redcliffe base the previous day.
Brisbane-based Australian Agricultural Company Pilatus PC-12/47E VH-AAC arrived from Archerfield and then departed to Brunette Downs.
Air Gold Coast Beech 58 Baron VH-YDC arrived from Wellclose and Barkly Downs before then departing to the Gold Coast.  It appeared to fly out from the Gold Coast to Roma Airport and other destinations on Sunday 29 May.
And Bathurst Aero Club Cessna 172 VH-BAC, along with Amchamp 8KCAB VH-ADA, both looked to arrive from Charleville Airport.  They arrived into there from Bathurst over the weekend.
Finally, familiar bizjets noted around the region, also on Tuesday 31 May, included Gulf Coast Aviation Cessna 510 Citation Mustang bizjet VH-KXM which also popped into Longreach Airport, arriving from Bankstown and later departing to Vanrook Station.
Air Gold Coast Cessna 525 Citation CJ1 bizjet VH-CDG arrived into Bundaberg Airport from the Gold Coast and Archerfield.  It is due to return to these places on Wednesday 1 June.
Recently re-registered (operator) Robindale Group / Air Link Cessna 510 Citation Mustang bizjet VH-CMK completed a medical evacuation flight into Mackay Airport, arriving from and later departing back to Bankstown as "Airmed 911".
While Avcair (Avgunn) LearJet 60 bizjet VH-ILJ also looked to visit Mackay Airport but from Brisbane.  It also looked to visit Longreach Airport late on Sunday 29 May, also from Brisbane.
It seems fellow Avcair (Avgunn) LearJet 60 bizjet VH-OLJ also visited Mackay Airport, arriving late on Monday 30 May from Brisbane and departing back there mid-morning on Tuesday 31 May.
And Machjet (Machjet International) Cessna 525A Citation CJ2 bizjet VH-ZIY arrived into Mackay Airport late on Monday 30 May from the Sunshine Coast and Archerfield before it returned to the Sunshine Coast mid-morning on Tuesday 31 May.
It also appears that fellow McDermott Aviation Group / Machjet International recently delivered Cessna 525C CitationJet CJ4 bizjet VH-PIY also popped into Mackay Airport, also on Tuesday 31 May, arriving from Brisbane and Archerfield and departing to Cairns.
All photos taken by Lee Holloway  ©
Posted by Damian F at 9:43 PM