During my recent trip over to Western Australia (WA), I spent a lot of time photographing the comings and goings from Perth Airport. One of charter operators that are based at Perth Airport is Maroomba Airlines. Maroomba has been providing air travel services since 1985, focussing on Fly-in Fly-out (FIFO) and other general charter flights to rural and remote WA. Maroomba Airlines carries in excess of 60,000 passengers annually, and operate a range of aircraft types including four Dash-8-100 turbo-prop aircraft that have been wet leased from Skytrans Airlines.

Maroomba first leased a pair of Dash-8-100s off Skytrans in 2006 with VH-QQA and VH-QQB (above and below) venturing over to the West from Cairns. They initially operated in an all-white colour scheme with Maroomba titles. 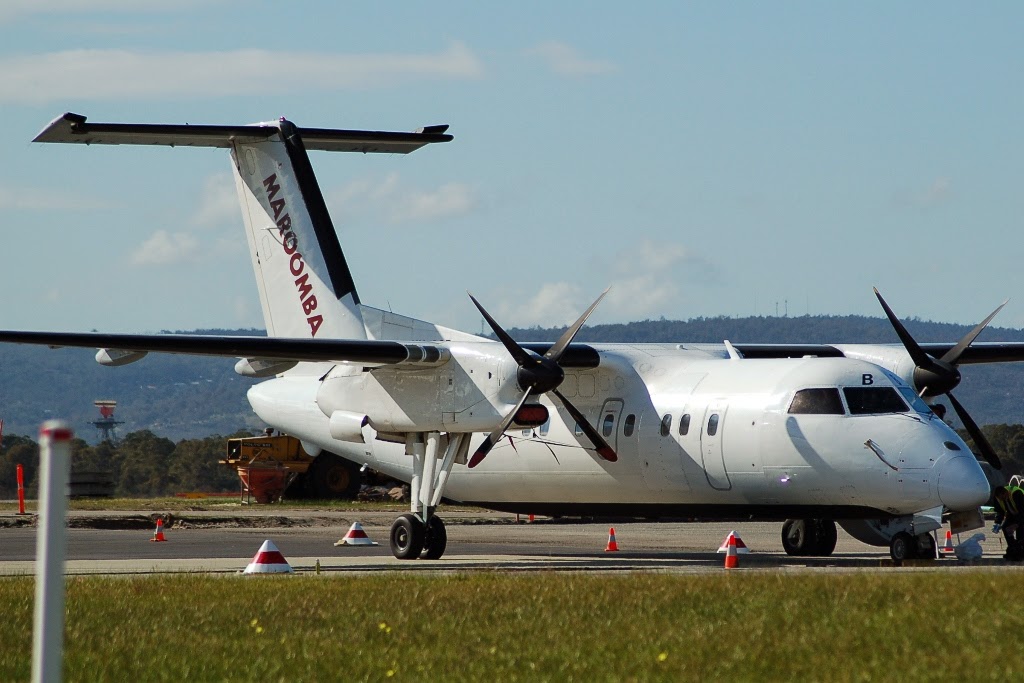 Over the years, VH-QQC also joined the Maroomba fleet, and the Dash-8s were painted in a 'revised' Maroomba livery featuring a maroon-coloured tail with titles.

Another Dash-8-100 - VH-QQE - also spent time in the West replacing VH-QQA which spent some time flying around Australia with Air Cruising Australia - Bill Peach Adventures. VH-QQE was spotted several times in Central Queensland operating for Skytrans in Maroomba colours. I spotted both VH-QQA and VH-QQE at Clermont Aerodrome in late April 2011.

With VH-QQE retired from Skytrans service around a year ago, another Dash-8-100, VH-QQG, has recently joined the Maroomba fleet as well.

All four Dash-8-100s - VH-QQA, VH-QQB, VH-QQC and VH-QQG - make frequent trips out of Perth for Maroomba flying to many different parts of WA on charter duties.
Posted by Damian F at 7:53 PM