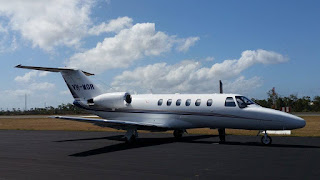 Meanwhile, a short time later, Earth Commodities Cessna 550 Citation Bravo VH-CCJ was also noted visiting Roma Airport, but flying from and back to its Brisbane Airport base.

Finally, as with most days, there were a couple of Super King Air turboprops that called into Roma Airport on various missions.  On Tuesday 29 November, Brescon's recently registered Beech B200 VH-WXB and Sabstall's Beech B200 VH-NME flew from the Brisbane West Wellcamp Airport to Roma and back.  While General Aviation Maintenance (GAM) AeroCommander 500-S VH-UJX operated the week-daily freight run into Roma Airport, flying from Brisbane to Dalby, Roma and Charleville before returning in reverse later in the afternoon.