Just when we thought a busy week of plane spotting was over, two fantastic bizjets popped into Gladstone Airport on Friday 8 February.

As seen in the photo above, the Bechtel Corporation Dassault Falcon 900EX bizjet N970SF returned to Gladstone from Brisbane.  In the afternoon it departed back to Brisbane and was photographed by Jamie C. 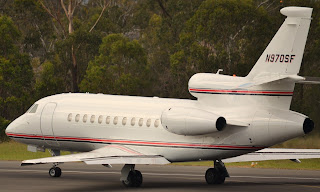 The other bizjet to visit was Gulfstrem G-V(SP) (G-550) bizjet N625JK, which also arrived from Brisbane.

Interestingly, N625JK has a Malaysian flag near the door.

It too departed back to Brisbane and was also photographed by Jamie C.

Fellow Gladstone Airport plane spotter, Michael F drove to the Airport, but literally missed both bizjets by minutes - he had received a notification from our Facebook page - you too can follow us on Facebook HERE.

Michael F did manage to capture some lovely images of QantasLink (Cobham Aviation) Boeing B717-200 VH-NXI as it departed to Brisbane as QJE1713.

A little later - and rather surprisingly - Virgin Australia Embraer E-190 jet VH-ZPB was spotted at Gladstone Airport by Jamie C as it departed to Brisbane as VOZ1716.  It had earlier arrived from Brisbane as VOZ1713.

Locally-based Australian Helicopters Kawasaki BK-117 B-2 VH-VRP was photographed by Jamie as it completed a local flight. 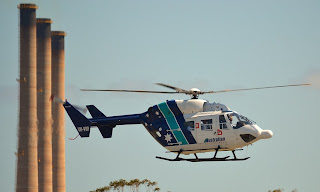 Meanwhile Bell 206B (II) VH-JAQ of Stirling Consolidated in Theodore was also spotted at Gladstone Airport.  VH-JAQ is a familiar sight around Central Queensland Airports.

Thanks Jamie and Michael for a great coverage of an exciting day at Gladstone Airport!

Photos taken by Jamie C and Michael Fleetwood  ©
Posted by Damian F at 8:36 AM