JetGo Australia Embraer E-135LR VH-JGB is usually utilised on Fly-in Fly-out (FIFO) operations out of Brisbane and Townsville Airports to Barcaldine and Osborne Mine.  However on Saturday 9 February, it was noted that VH-JGB popped into both Rockhampton and Hamilton Island Airports. 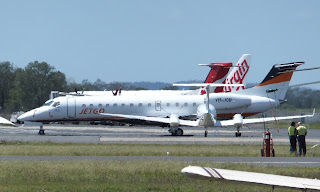 VH-JGB arrived into Hamilton Island from Sydney, before touching down at Rockhampton Airport (where it is pictured above last year) about lunchtime.  After only a brief stop, it departed to Brisbane.
Posted by Damian F at 11:00 PM