This time next week, I'll be preparing to head to Melbourne to attend the Australian International Airshow and Aerospace & Defence Exposition at Avalon Airport near Geelong. 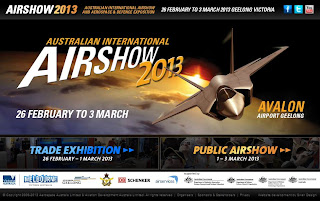 It will be an exciting few days as we explore the Trade Exhibition during the week, and then experience all the power and excitement of the Public Airshow over the weekend.

By far the highlight of the flying displays promises to be the flying debut of the United States Air Force (USAF) Lockheed Martin / Boeing F-22A Raptor fighter aircraft.

The Royal Australian Air Force (RAAF) will also showcase nearly every aircraft currently flown, with four-ship displays from Boeing F/A-18F Super Hornet fighter aircraft no doubt being the highlight.  The Roulettes - the RAAF's formation aerobatic display team - will also be flying over the weekend.

More information - including ticketing information and pricing - for the Public Airshow at Avalon can be found on the official website - link HERE.
Posted by Damian F at 9:22 PM