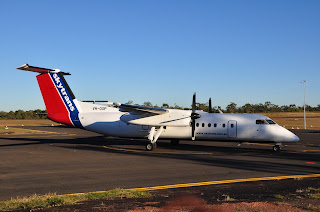 VH-QQP reportedly returned to Brisbane only 18 minutes after departure after reporting that it had a minor technical problem. The aircraft was turned around as a precaution and landed back safely at Brisbane at around 5pm.

Dash-8-100 VH-QQI later operated into Clermont as the rescheduled SKP870, joining sisterships VH-QQH and VH-QQM on the ground at Clermont. 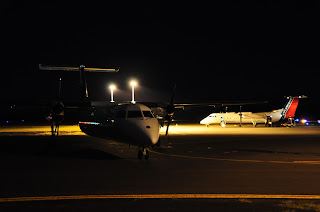 They all departed back to Brisbane early on Tuesday 5 February.
Posted by Damian F at 7:36 AM