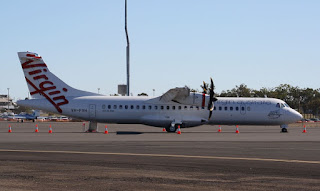 The Bundaberg service will operate a daily return flight which has been timed to allow for convenient transfers to connecting flights out of Brisbane.  Virgin is particularly keen to launch services to Bundaberg, where there has been a monopoly market for over 10 years. The airline will hold a community day in Bundaberg in the next few months, giving locals the chance to board the ATR 72 turboprop aircraft and meet Virgin Australia pilots and crew.

Special introductory fares go on sale from this weekend for both services.
Posted by Damian F at 3:03 PM