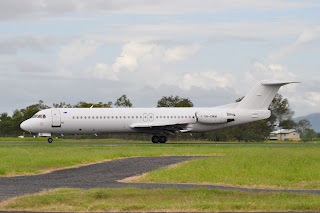 This will be the end of a 12 month lease of two Alliance Airlines Fokker F-100 aircraft by Virgin Australia. Three of the Alliance F-100s that operated most of the flights for Virgin Australia were VH-XWM, VH-XWN, and recently VH-XWS, which all wore a plain white livery with small Alliance titles by the front port-side door.

These aircraft operated flights from Brisbane to Cairns, Rockhampton (where VH-XWM is pictured above), Newcastle and Proserpine / Whitsunday Coast Airport (where VH-XWS is pictured in January this year). From Monday 11 February, Virgin Australia's own aircraft will now operate the majority these routes previously flown by the Fokker F-100s, with Skywest Airlines-operated ATR 72s expected to operate flights to Rockhampton. 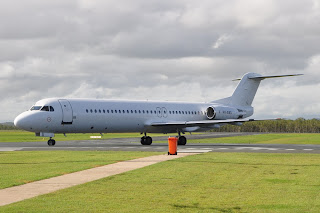 Alliance Airlines will still operate some Fokker F-100 aircraft for use by QantasLink to destinations throughout Central Queensland.
Posted by Damian F at 6:38 AM