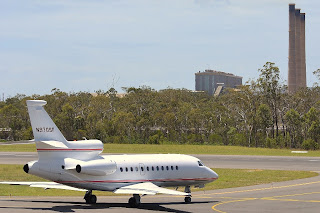 Jamie C was at the right place at the right time and managed to catch the Bechtel Corporation Dassault Falcon 900EX bizjet N970SF departing Gladstone Airport for Mackay on Thursday 7 February.

However, all didn't got to plan, with the Falcon missing the main taxiway 'A1' that leads to the Runway.  After taxiing up to a dead-end and turning around, N970SF managed to find the Runway and back-taxi, before departing of Runway 10.

N970SF eventually landed at Mackay Airport, before finishing the day at Brisbane Airport.

Jamie also managed to capture some great images of the afternoon comings and going at Gladstone Airport on Thursday 7 February, QantasLink seemingly dominating these movements.

Dash-8-Q300 VH-TQY was photographed departing Gladstone for Brisbane as QLK2301.  VH-TQY is one of only a handful of Q300s that have been repainted into new Qantas/QantasLink colours. 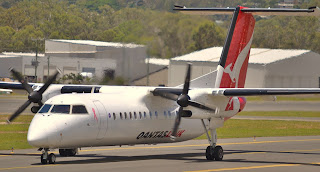 Cobham Aviation-operated Boeing B717-200 VH-NXI was caught departing Gladstone for Brisbane as QJE1707.

Lastly, Jamie caught some of the daily helicopter action at Gladstone Airport on Thursday 7 February.  Rotorco Aerospatiale AS.350B2 VH-LED was photographed departing South-bound, after arriving from the North the previous day.

Locally-based Australian Helicopters Aerospatiale AS.350BA VH-HQO was flying several training flights during the afternoon - Jamie caught VH-HQO as it returned from one of these.

And finally, Avaition Tourism Australia (HeliReef) Bell 206L-3 VH-CKP was spotted arriving back into Gladstone Airport after completing a sortie to Heron Island.

A great afternoon of action - thanks heaps Jamie for your great photos!