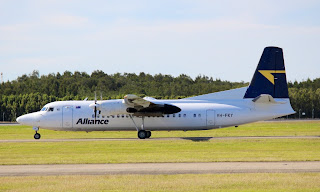 VH-FKY was recently been spotted at Brisbane by Brendan B.

Joining VH-FKY at Barcaldine late on Thursday 23 May was Hinterland Aviation Beech B200 King Air VH-HLJ which arrived from Cairns and later departed to Tonwsville as HND780.

It is interesting to note that both aircraft were also noted at Barcaldine on Monday 13 May, where VH-FKY made its first visit to Barcaldine.  VH-FKY also called into Emerald Airport on its return to Brisbane, presumably for fuel.

All photos taken by Brendan Berry  ©
Posted by Damian F at 8:10 AM