With thanks to local plane spotters Jamie C and Michael F comes news that weather conditions at Gladstone Airport on Monday 6 May were so poor that at least two scheduled flights into the Port City from Brisbane could not land and were forced to return to Brisbane.

QantasLink (Cobham Aviation) Boeing B717-200 VH-NXR was captured by Jamie during the morning as it operated as QJE1705, and was one of the first commercial departures from Gladstone bound for Brisbane.

It is believed that QantasLink (Cobham Aviation) Boeing B717-200 VH-NXN operating as QJE1706 and Virgin Australia Regional Airlines ATR 72-600 VH-FVN operating as VOZ1709 were later unable to land at Gladstone and returned to Brisbane.

In fact Jamie also sends through photos of the only interesting 'movements' at Gladstone Airport during Monday 6 May in the form of a pair of Robinson R-44 helicopters. 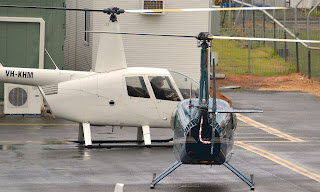 VH-KHW is owned by Helibiz and has been operating out of Airlie Beach / Shute Harbour, while VH-TCF is owned on the Gold Coast.

Their destination is unknown, and judging by Jamie's spectacular departure photos, they made for a great scene! 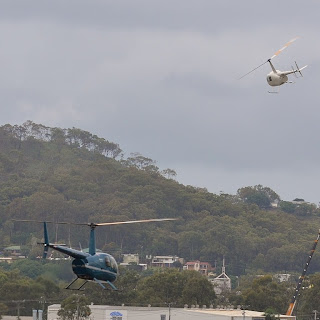 Thanks guys for the information and updates!  Thanks Jamie for the great photos!