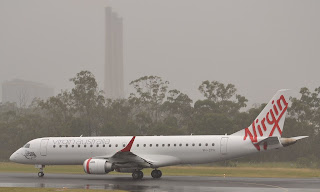 Making a surprise visit into a wet Gladstone Airport on Wednesday 29 May was Virgin Australia Embraer E-190 jet VH-ZPN, which was operating the VOZ1707 service from Brisbane.

Local plane spotters Jamie C and Tash C were on hand to capture some photos of VH-ZPN which has only recently returned from overseas where it was repainted into the airline's new livery.

VH-ZPN later departed back to Brisbane as VOZ1710, and we thank Jamie for capturing these fantastic departure photos as the rain came tumbling down at Gladstone! 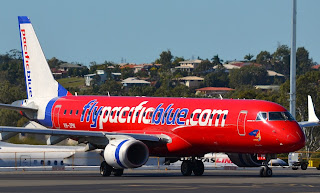 Also spotted by Jamie and Tash at Gladstone Airport on Wednesday 29 May was QantasLink (Cobham Aviation) Boeing B717-200 VH-NXN.  Of note about VH-NXN's visit was that it was parked on the upper apron at Gladstone Airport - these aircraft usually park on the lower apron.

Fellow B717-200 VH-NXO was also spotted at Gladstone Airport - and also parked on the upper apron. 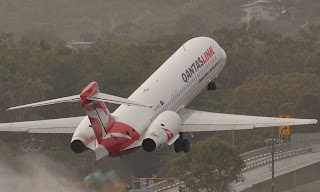 QantasLink Dash-8-Q400 VH-QOK was also photographed as it departed Gladstone for Rockhampton as QLK2300.  Interestingly, VH-QOK operated a Qantas/QantasLink international service from Cairns to Port Moresby later in the day!

Lastly, Tash captured a lovely photo of Virgin Australia Regional Airlines ATR 72-500 VH-FVH as it taxiied for departure from Gladstone bound for Brisbane. 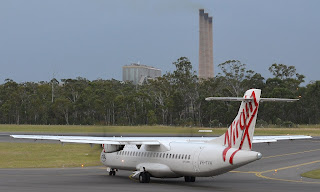 Sincere thanks to Jamie and Tash for braving the wet weather and capturing some fantastic photos at Gladstone Airport!