No less than five various model B200 King Air and B300 Super King Air turbo-prop aircraft were spotted at Gladstone Airport on Monday 20 May and Tuesday 21 May. 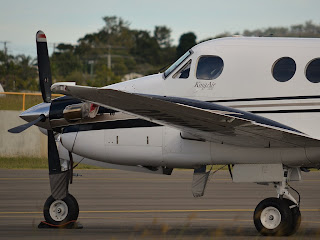 Four of the King Air aircraft were believed to have arrived late Monday after operating Fly-in Fly-out (FIFO) charter flights from Chinchilla.  They all remained parked in various locations around Gladstone Airport, and eventually departed for Brisbane on Tuesday 21 May.

These four King Air aircraft performing (believed to be) FIFO flights were complimented by another King Air visitor performing a very different type of flight with Royal Flying Doctor Service (RFDS) Hawker Beechcraft B200 King Air VH-FDT arriving from and departing back to Brisbane as on a medical evacuation flight as "FlyDoc 436".

Other General Aviation visitors to Gladstone Airport on Tuesday 21 May included McNab Aviation (of Toowoomba) Cessna 414A VH-FKH and Toowoomba-based Cirrus SR22 VH-VIA, which Jamie captured parked together on the somewhat crowded General Aviation apron.

Also Bell 206 VH-ONR of M.I. Helicopters at Roma was spotted by Jamie as it departed for parts unknown.

Finally, Jamie also managed to capture a couple of lovely images of Virgin Australia Regional Airlines latest ATR 72-600 VH-FVY as it made its final approach on Gladstone Airport's Runway 28 while operating a scheduled service from Brisbane early on Tuesday 21 May. 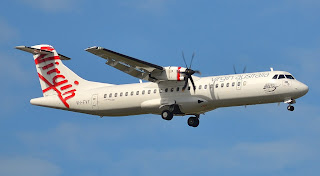 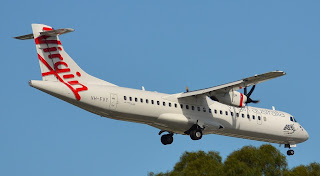 My sincere thanks to Jamie for sending through these absolutely fantastic photos from a great days spotting at Gladstone Airport.  It certainly looked like a really top day!!