On Thursday 5 September, I spotted Alliance Airlines Fokker F-70 jet VH-NKU parked on the Moranbah Airport parking apron.  It had earlier arrived from Brisbane as UTY8304. 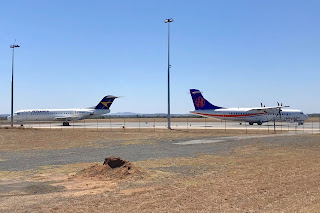 I believe this is the first occasion that a commercial jet aircraft has landed at Moranbah Airport with all current Regular Passenger Transport (RPT) and Fly-in Fly-out (FIFO) flights operated by turboprop aircraft.

The Alliance Airlines Fokker F-70 jet was in town to allow local Moranbah State High School students who aspire to have a career in the aviation industry the opportunity to meet and talk to the crew of the jet.  The students were given a safety briefing, tour of the airport, and spoke with the Operations Manager, ground crew and in-flight crew.

Hevilift appears to now operate almost daily FIFO charter flights into Moranbah Airport from and back to Brisbane.

Hevilift also operates twice-weekly FIFO charter flights to nearby Middlemount Aerodrome, also flying from and back to Brisbane.