On Friday 20 September, Avcair (Avgunn) LearJet 60 bizjet VH-ILJ was spotted on the ground at Rockhampton Airport.  It looked to arrive from Townsville and later departed to Brisbane. 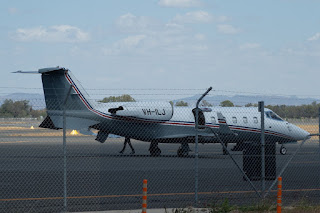 Meanwhile, also on Friday 20 September, the familiar sight of Mitchell Water Cessna 525 Citation M2 bizjet VH-WMY was back at Hamilton Island Airport.  It looked to arrive from Archerfield via the Sunshine Coast and later departed back direct to its Melbourne (Moorabbin) base.

It also appears that earlier in the week on Tuesday 17 September, VH-WMY visited Miles and Roma Airports during a busy day of flying out of and back to Melbourne (Essendon).

While late tonight, also on Friday 20 September, LifeFlight (Aeromed) LearJet 45 bizjet VH-VVI "Ambulance 451" was planned to visit both Proserpine (Whitsunday Coast) and Mackay Airports.  It is due to arrive into Prosie from Townsville before flying down to Mackay Airport.  VH-VVI is then planned to return to Townsville.

As mentioned below, VH-CCJ has been in and out of Bundaberg Airport most days during this week.