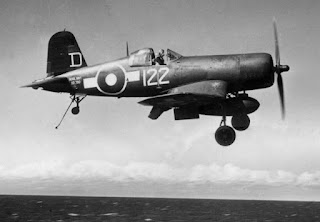 Barely a month after the official Japanese surrender ended World War II, some Mackay residents witnessed the unusual spectacle of a war plane crashing into the sea and exploding into flames.

The crash occurred on 11 September 1945, when a Royal Navy (Great Britain) Chance Vought F4U Corsair crashed in the sea near Flat Top after the pilot had bailed out.

The Corsair was one of a flight of four Corsairs which had taken off from a Royal Navy aircraft carrier cruising off the coast and they while they were on a goodwill visit to Mackay.

Photo sourced from:  http://ww2eagles.blogspot.com.au/2014/08/royal-navy-corsair-photogallery.html
Posted by Damian F at 7:00 AM